Bestselling novelist, memoirist, and short story writer Jennifer Finney Boylan explored the radical act of telling stories and the powerful role narrative plays as a catalyst for social change in her 2020 Winter Institute breakfast keynote, “Gender and Resistance,” which took place on Thursday, January 23, in Baltimore. 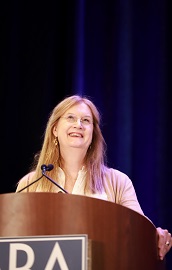 She began her talk by sharing that when she was younger, she spent time as a bookseller herself. She started at Classics Books, a Canadian chain that once had locations in New York City; later, she was as an editorial assistant at Viking Penguin and E.P. Dutton.

“At the bookstore, I would sit underneath a sign that read ‘Ask Me Anything.’ And this being New York City, people would,” she said. “One time, in July, someone came up to me and said, a little irritated, ‘Excuse me. What have you done with all the Santa Claus suits?’ It’s a question I’m still trying to figure out the answer to.”

Boylan said that while her jobs in bookselling and publishing were “kind of goofy,” she’d be lying if she didn’t say she loved them. “All I wanted was to be around books, and even now, decades later, I still feel that way,” she said. “Booksellers and publishers are among the people I most admire in the world.”

That world, she continued, is in a tight spot right now. “It isn’t just that bookstores and publishers are threatened by the vampire economy,” she said. “It’s also that we’re living through a time where the very nature of the truth and art itself is under attack.”

“Please allow me to remind you,” she added, “that one of the most important ways of fighting back is by way of the work that you all do every day. If you want to open people’s hearts, if you want to inspire passion and fire and resistance, well, there’s no better way to go about it than by writing books, publishing books, and selling books.”

Said Boylan, “You sit there surrounded by the greatest literature in the world beneath the sign that says ‘Ask Me Anything,’ and the only thing anybody asks you in July is, ‘What have you done with all the Santa Claus suits?’”

Sometimes, the frustrating work that one does makes a huge difference, she added. It’s an act of resistance, defiance, and love. “The work we do may not seem glamorous sometimes,” she said, “but truly, on a good day, we really are all in the business of saving souls.”

Boylan concluded by reading two short pieces. One was a New York Times column titled “Bring Moral Imagination Back in Style,” which centered on Boylan’s loss of her hearing and her experience appearing on the MSNBC show Hardball With Chris Matthews, during which she was asked what bathroom she, a transgender woman, should use.

“[The issue] wasn’t about marriage or bathrooms,” Boylan said. “It is about the fact that some Americans don’t like the idea that there are gay or trans people in the first place, and cannot imagine our lives. They seem to think we have come up with the entirety of our existence primarily in order to hurt other people’s feelings.”

“I’ve seen people open their hearts on a range of issues when some otherized soul is revealed to be a member of their own family or a friend,” she added, noting that she’s glad for the progress that is being made. “But too many people who fall outside the bright lines of our culture are met with hatred and ostracism because whoever and whatever they are is something others have never been compelled to imagine.”

She expanded on the nature of loving others as an act of resistance by reading a piece she wrote encapsulating the themes in her upcoming book Good Boy: My Life in Seven Dogs (Celadon Books, April 2020).

Each dog taught Boylan something about “the perilous nature of devotion.” While some people think the magic of dogs is that their love for humans is unconditional, she said, what’s really unconditional is “our love for them.”

“At 60, I’m pretty if there’s any reason why we are here on this planet, it is in order to love one another,” she said. “It is, as the saying goes, all ye know on earth, and all ye need to know. And yet, as it turns out, nothing is harder than loving human beings. That’s where dogs come in — it is in our love for dogs that we can most express how hard it is to be human, how glorious, and how sad.”