On Friday, February 19, at the American Booksellers Association’s 2021 Winter Institute, authors Lauren Groff, Viet Thanh Nguyen, and Colson Whitehead joined Michelle Malonzo, buyer at Changing Hands Bookstore in Arizona, for a discussion of the state of literature in the aftermath of political upheaval, as well as their upcoming books.

Booksellers can view a recording of this session on the Education Resources page on BookWeb.org. 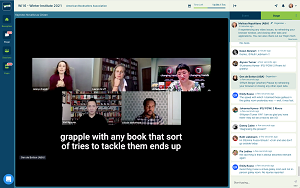 Nguyen began by saying he finished writing The Committed before the COVID-19 outbreak and the murder of George Floyd. Both events had a huge impact on him, he said, but “these events, as horrible as they were, were just extreme manifestations of things I’d seen my entire life in the United States.”

When his novel The Nickel Boys came out, Whitehead said people would always talk about how prescient the book was. “Eventually, we’re going to have another incident that makes it relevant again because we’re not talking about looking into the future — we’re diagnosing the past,” he said. “If you’re talking about race and capitalism, we’re talking about problems that are never solved.”

“I do think that art is inherently oppositional,” added Groff, the author of the upcoming Matrix. “If you’re paying attention to the world, your work is going to be political, or be engaged in political directions.”

Malonzo noted that each author has written a work of historical fiction, but all three books are more than just an allegory.

Groff said that she’s always had anxiety about going into history for exactly that reason. At the beginning of the writing process, she tries not to infuse any meaning at all. “I just write into the thing...you follow your love into the work, and eventually, for me, it just becomes something else,” she said. “And if it doesn’t, I have to find a way to do it [through] lots of crying, and a lot of naps, and 12-mile runs.”

Nguyen said that when writing a historical novel, writers should pay attention to the ways human beings haven’t changed that much over centuries, saying that his book The Sympathizer is about torture in the 1970s, and as he was writing, details about detainee torture at Iraq’s Abu Ghraib prison came out; the torture techniques being used in the late 1970s were still being used in Abu Ghraib.

Groff noted it’s also important to think about the purpose of literature as a whole, saying she doesn’t read for pure pleasure, but rather a relational mixture that depends on who she feels she is in the moment in the world at large.

Whitehead said that, personally, he isn’t sure what literature is for, and while he doesn’t go into his books with the intention to teach, he knows that books often do. “I’m delighted when I talk to high school kids and they’ve never even thought about Jim Crow that way before, how Jim Crow works,” he said. “Our educational system is so crappy that sometimes a novel will stand in for historical texts.”

Instead of thinking about impact, he gravitates toward writing the project that is right for him at the time. “For The Nickel Boys,” he said, “I was trying to reconcile my hopes for the country and my deep pessimism. Those ideas manifested into the two main characters.”

Malonzo added that right now, everyone is talking about equity and inclusion; she asked the authors what that means when creating an equitable product.

Nguyen compared the issue to Hollywood casting. When movies and television have an all-white cast in an environment where it shouldn’t be that way, it’s a failure of the imagination of the casting and everyone involved in it. “That applies, to some extent, to literature,” he said. “When we think about casting a novel, let’s say, who are you putting in your book? That question should at least be in people’s minds.”

That being said, Nguyen noted that he doesn’t think equity in that sense has any relationship to making people feel good, which was why he made the main character in The Sympathizer part Vietnamese and part French. “It gives us a view of the Vietnam War from a Vietnamese point of view,” he said, “but he’s a person who does terrible things and witnesses terrible things, and that makes some readers uncomfortable because I don’t step in as a writer and say that’s bad, we shouldn’t do that.”

To build off that point, Whitehead said that his book The Underground Railroad features white villains, white heroes, Black villains, and Black heroes. In schools, he’ll often be asked why other slaves on the Randall plantation are terrible to the book's main character, Cora. “It’s because they’re products of their traumatized existence,” he said. “In movies, we have this idea of a plantation where everyone’s helping each other. And I thought, in real life, all these people have been horribly abused and tortured. They’re not going to be this big happy family.”

But, representation depends on the book. Some books, like The Nickel Boys, Whitehead said, have smaller casts and focus on maybe one or two people.

Groff noted that for Matrix, she wanted men to be seen from the corner of the eye — not even Jesus is seen fully in the book’s convent. “I was trying to flip the narrative of the Catholic Church from the time which is so heavily male-dominated that women were seen peripherally,” she said. “It’s an inversion of that history.”

And while writing is hard right now, editing and revising is even more so. The three authors agreed that between family, current events, and the work itself, everyone is struggling. “In terms of [COVID],” Whitehead said, “it became another horrible thing in the world that tries to make you not work, and you sort of have to power through.”

But reading has helped the authors cope with both their work and the year. Take a look below at some of the books and authors mentioned during this keynote discussion: