More skele-fun is in the works at independent bookstores this year as Halloween spending is predicted to reach a record $9.1 billion.

Seven in 10 consumers will celebrate Halloween this year, according to the National Retail Federation, and many indie booksellers are planning new events, arranging Halloween book displays, and even dressing up in costume to prepare for what should be a busy season. 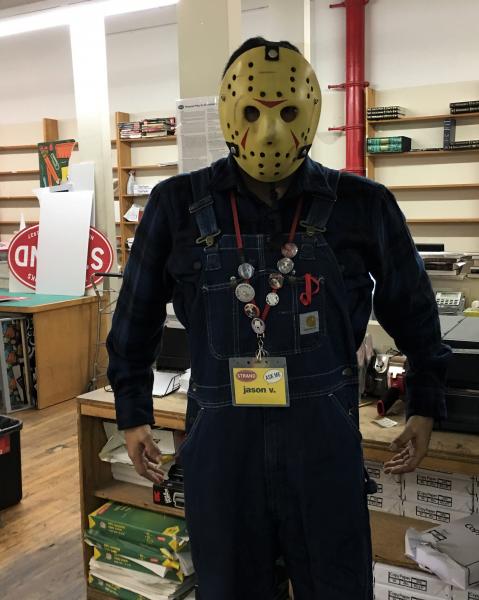 A bookseller at The Strand gets into the holiday spirit.

The Strand in New York City has even temporarily changed his name tag to Jason to match his Friday the 13th-inspired outfit, said marketing and communications director Leigh Altshuler.

“Some people dress up every day of the month,” she said. “It’s really fun. Somebody at the door was greeting people with the Maleficent headpiece on.”

The Strand will host an adults-only Halloween party in its rare book room on October 30. Tickets to Boos and Books: A Literary Halloween go for $25, and 150 people are expected at the event, which will feature tarot card and palm readings, spooky writing activities, and mystery games.

“This is the first year that we will be having the Boos and Books party, which we are really excited about. There has definitely always been a Halloween spirit here because of the nature of what we sell. Both customers and staff definitely get into the holiday spirit,” Altshuler said. “We know there is interest in the literary world for this kind of thing.”

The Strand also created a new display this year called “I Read Dead People“ featuring the works of Shirley Jackson, Edgar Allan Poe, and H.P. Lovecraft as well as modern horror writers such as Stephen King.

“It’s not something we’ve done before. We’ve done a Halloween table in the kids’ department, but this is a fun play on that,” Altshuler said.

“You can extend it all month. Everyone’s really into it. It’s fun,” she said. 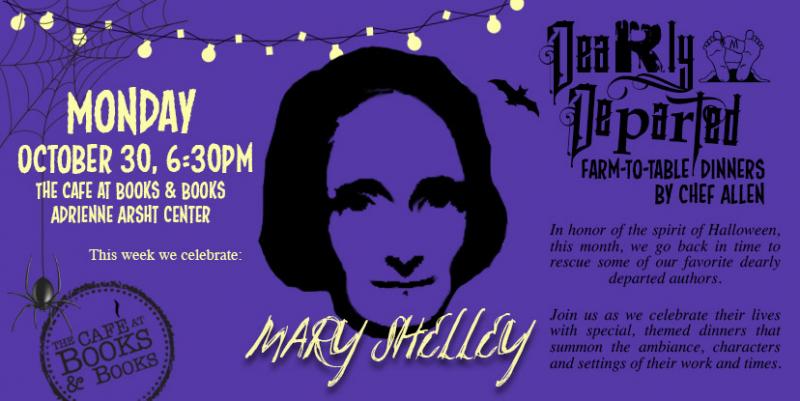 The Café at Books & Books at the Adrienne Arsht Center in Miami is dedicating the entire month of October’s Farm-to-Table Monday night dinner series to “Dearly Departed“ authors such as Edgar Allen Poe and Mary Shelley. “People can come in costume. It’s all about celebrating dead authors,” Nosti said. “It creates community.”

Books & Books is also partnering with City Theatre this year to present “Scary Shorts” at its Miami café as well as hosting Halloween night parties at both its Coral Gables and Miami Beach locations. The Miami Beach party is a longtime tradition, where customers can watch the costume parade on Lincoln Road, but the Coral Gables party, which will feature live music, is new.

Halloween is a natural holiday for booksellers to embrace, Nosti said, given that so many of the holiday’s trappings are derived from books. Books & Books always sees sales of horror novels rise in October. “Everyone starts thinking about great ghost stories and scary stories. We see those books moving,” she said.

Sales this Halloween season are expected to rise 8.3 percent to $9.1 billion in the U.S., up from $8.4 billion a year ago and $5.1 billion a decade ago, said Ana Serafin Smith, a spokeswoman for the National Retail Federation. The NRF’s annual Halloween survey, conducted with Prosper Insights & Analytics, found that 72 percent of U.S. adults will celebrate Halloween this year, up from 59 percent in 2007.

Smith attributes the increased enthusiasm for ghoulish delights to Pinterest, Instagram, Twitter, and other social media. Retailers, including independent bookstores, are also embracing social media to promote their Halloween wares and events.

“Social media has changed how consumers are enjoying and celebrating Halloween,” she said. “When you see pictures of friends getting their houses ready for Halloween, you want to do that, too. We honestly believe social media is the main reason why it’s picked up a lot more.”

While the bulk of the spending will go to costumes and candy, nearly seven in 10 of those who celebrate will buy decorations and four in 10 will purchase greeting cards, according to the NRF.

“I see this trend building with older family members,” Smith said. “Grandparents who can’t be around their grandchildren for Halloween send a card with maybe some candy.”

Scattered Books Bookstore in Chappaqua, New York, has added some merchandise related to the holiday, such as adult Day of the Dead coloring books, stickers, and other small items, in addition to promoting Halloween books. 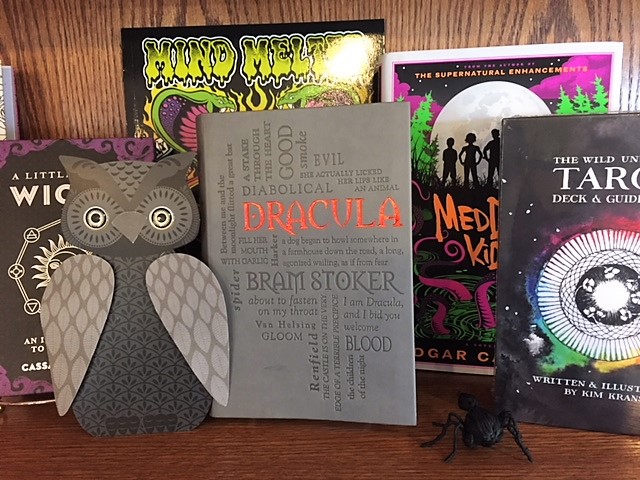 “It’s a really good excuse to carry those extra fun items that people can buy as gifts for teachers or spouses,” said owner Laura Scott Schaefer.

Scattered Books will also hold a Halloween party in the “candlelit haunted bookstore” for the first time this year on October 27 with a costume contest, scary movie trivia, and “spooky surprises.”

“We’re serving drinks in fake IV bags. We’re going to read The Tell-Tale Heart with subwoofer sound effects from the basement to emulate a heartbeat. We’re really going all out on this,” Schaefer said. “It’s a connection to my customers and to the community. I feel like adults want something fun to do for themselves. I’m trying to fill that need. I’m hoping some sales will come from it, but also a ton of goodwill as well.”

Maureen Palacios, owner of the children’s bookstore Once Upon A Time Books in Los Angeles, is encouraging her young patrons to bring a flashlight to “Scary Stories in the Dark with S’mores” on October 27.

“People want something like that. It’s not real scary,” said Palacios, who put up her Halloween window display in September to meet growing consumer demand for items such as Day of the Day mariachi skeletons and sugar skulls for decorating.

“We’ve been getting more and more stuff, and that helps your bottom line. You have a higher margin on these kinds of things,” she said.

The NRF reports that a third of Halloween shoppers start their shopping in September or earlier.

“Retailers are playing really smart right now in how they are getting their stores ready for Halloween,” the NRF’s Smith said.

Once Upon a Time is also planning book events related to Halloween, including a visit from Gris Grimly, who illustrated such books as Gris Grimly’s Frankenstein (Balzer & Bray/Harperteen) and Edgar Allan Poe’s Tales of Mystery and Madness (Antheneum Books for Young Readers). “He is our favorite author and he is coming in October,” said Palacios. “He brings out crowds of people.”

Malaprop’s Bookstore/Café in Asheville, North Carolina, will host “All Hallow’s Read” on Halloween with an early scary story reading for kids followed by literary karaoke for adults, complete with dry ice to set the mood. 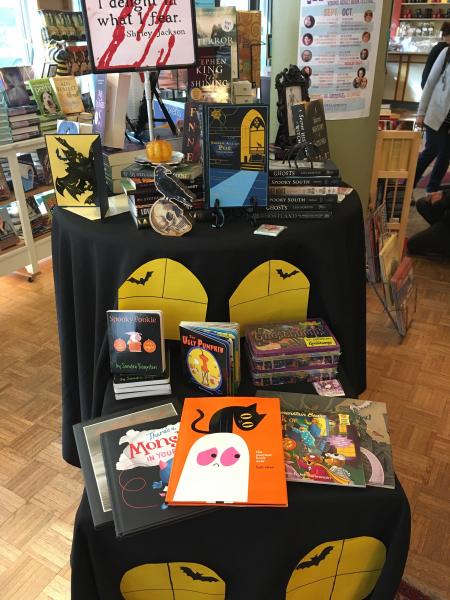 “People can come dressed up or not and read scary stories and have fun treats in the café,” said Melanie McNair, Malaprop’s events and marketing director. “Halloween brings out everyone’s inner child. It’s an opportunity to play, and we’re bookish people so playing means reading for us.”

This is the store’s busy season, with leaf peepers heading into the mountains, so the stock at Malaprop’s includes plenty of Halloween and horror tomes.

“We do have a spooky books display. They are selling well,” McNair said. “All of our Halloween theme sidelines always do well. People buy them months in advance. We put them out as soon as we get them. We’ve had Day of the Dead [merchandise] for months. We sell out. We have to re-order. Halloween is representing fall, and that’s how people celebrate the change of season.”