In 2015, Independent Bookstore Day’s first year celebrated at a national level, Nissley met with other Seattle-area bookstores to discuss ways they could get customers to visit as many stores as possible, and together they came up with the idea of a bookstore passport.

That first year’s passport featured 17 stores, Nissley said, and those who visited all the stores and got their passport stamped were offered a reward of 25 percent off at each store all year. Forty-two people, he noted, went to all 17 stores, which required taking two ferries. “Over the years, we keep being amazed by how many people do it. Year three we had a big media push — The Seattle Times wrote an article about us — but last year, we had 636 people visit all 21 stores in Seattle in one day,” he said. 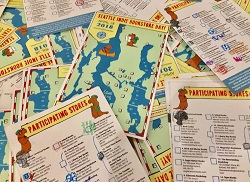 The participating indies pay $100 to be included on the Seattle-area passport. To ensure that customers can visit all the stores, they have also devised a schedule; the stores on the peninsula, for example, open at 7:00 a.m., and then customers can head back into the city. The first customer to visit all participating stores last year finished at 1:00 p.m.

“We don’t want to stop people from doing it,” Nissley said, noting that participating stores still believe the generous reward for those who complete the full passport is worthwhile. “I think other people are a little spooked by how much we’re giving away, and I would just say that none of us regret it.”

When the Seattle stores realized how many people wanted to complete the full passport, they thought of ways to take the pressure off, Nissley said. “We added that if you visit three stores, you get a one-time 30 percent off coupon. And this year, we’re adding that for every three stores, you get that same coupon.”

And while there is a worry that there’s a lot of “stamp and run” going on, Nissley said, at Phinney Books it remains the second busiest Saturday of the year behind the Saturday before Christmas, raking in five times the amount of sales as a usual Saturday.

The Seattle stores have also established a steering committee for the event composed of six participating booksellers, which will be able to make decisions much further ahead of time than in other years, Nissley said, which will be helpful for marketing purposes and media coverage.

For social media, the Seattle stores have a committee of three people who handle marketing and media outreach. One person handles the event’s social media, Nissley noted, and makes sure each store posts daily leading up to the event.

In 2019, The Silver Unicorn teamed up with 14 Boston-area stores, all members of the New England Independent Bookseller Association (NEIBA), to create a passport for Independent Bookstore Day. The idea was inspired by Seattle’s Independent Bookstore Day and other multi-store events, Murphy said, noting that she stumbled into organizing the event herself for the past two years, but this year she worked with a co-director. “It’s definitely a community effort,” she said. “I am the bus driver, but everyone participates and puts their ideas in.”

Murphy said she has a long list of ideas for the event, and last year, she was able to implement one of them: a trolley to transport customers from store to store. “Boston has, pretty famously, useless transit, and is also a nightmare to drive around and park,” she said, noting that the idea was sparked by feedback from customers in 2018 stating that it was difficult to get to all the stores.

The trolleys were ticketed to customers at-cost, Murphy added, and funded up-front by NEIBA. “There wasn’t money made this year, but in my mind that’s sort of setting us up to being able to have a bigger celebration next year that does actually make money,” she said, “which can take some of the expenses off of the bookstores for printing bookmarks or any other fliers we’d want for the event.”

Participating stores mostly marketed to their own customers, but Murphy said she tried to pre-package and share as much as material as possible because she’d heard from booksellers that many wanted to participate, but no one had the time. If booksellers can find a point person to manage the event, she said, that enables more stores to join in.

Overall, it’s always going to be a community effort. “If someone is willing to take on the minutiae and be the driver to help people participate, that can work really well.” Murphy said. “This doesn’t have to be on a huge scale. You can do this with five stores.”

“It was a really big success,” Murphy added, noting that when attendees would get off the trolleys at each destination, customers browsing in-store would ask them who they were, what they were doing, and how they could sign up to participate next year. "The energy was really high. It was more of a success than I ever could have hoped for, so that was really thrilling.”

While Rain Taxi is not a bookstore, it avidly supports independent bookstores in the Twin Cities through events and its print publication, which is carried in indies, said Lorberer. “Because we’re a publisher and a catalyst to get people to events,” he said, “we were in a unique position to join the bookstores in supporting Indie Bookstore Day by creating a passport similar to the Seattle program.” 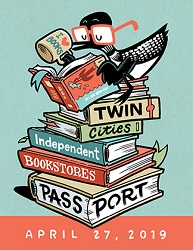 Rain Taxi designs, publishes, distributes, and advocates for the passport, he said, which takes a lot of the burden off the bookstores, so that they can focus on their own store events and promotions for that day. All stores within an hour of the core metro area that carry new books can join.

“It has been incredibly successful,” he said, noting that an astonishing number of people complete the passport. “I think one of the huge values of a passport program is that it makes it accessible on any level, so if you only go to three stores or five stores, if that’s your bandwidth, you still get something out of the experience and you still get to play the game to the level that you want to.”

“It allows us to paint a picture of the stores as a Gestalt,” he added. “Obviously, every store is unique and doing its own thing, but there is a kind of camaraderie and group ethic to what they’re all doing, and this is one day that this program allows us to celebrate that.”

The passport program is funded by sponsorships, Lorberer added. “By getting local businesses or publishers to kick in a little to cover the cost of the passport, there’s virtually no cost to the bookstores except, hopefully, staffing up for a big day,” he said.

For most of the participating stores, he added, Bookstore Day business amounts to five times their normal Saturday. He noted that he and his staff participate along with customers, and they can “see how packed and happy the stores are.”

Bagnulo said the Brooklyn stores were also inspired by Seattle’s program. “We wanted to create a community feeling among the bookstores rather than starting to feel like we were competitors with each other,” she said.

The Brooklyn stores didn’t start discussing the program until February 2019, Bagnulo said, so a lot of the program’s logistics focused on efficiency and simplicity because it needed to be pulled together quickly. Soon after the conversation began, 17 Brooklyn bookstores signed up to participate. 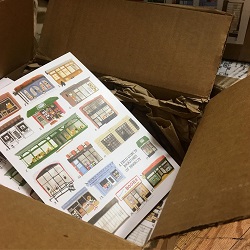 The stores worked with a local artist, who came up with something that was more of a field guide than a passport. “Rather than having a map of the stores, she did these beautiful artistic renditions of all 17 storefronts, so we created this beautiful print piece that ended up being something that people wanted to hold on to,” said Bagnulo.

The only cost to participating stores was the printing cost; stores needed to purchase a minimum of 60 guides, but some purchased as many as 500.

“Greenlight fronted the printing costs and we invoiced everyone afterwards for the amount that they took,” Bagnulo said. “We ended up breaking even in terms of marketing costs, and it ended up being affordable — people were paying anywhere from $10 to $50.”

The stores also offered a one-time 25 percent off coupon for customers who visited five stores on the passport. If people visited all 17, Bagnulo added, they were entered into a drawing for a grand prize package that featured swag from all participating stores.

The marketing leading up to the event worked well, Bagnulo noted, with each store marketing to its own customers and using the images the artist created for the field guide. “Because this went relatively well, I think everyone is going to be enthusiastic to do it again next year,” Bagnulo said, noting that she hopes to start planning earlier for next year’s event. “This was bookstore-to-customer driven in terms of marketing. We didn’t get a lot of outside or traditional media coverage, but I think that we could easily if we had a little more time to work on it.”

The American Booksellers Association now offers two opportunities for live online education: a twice-monthly Marketing Meetup and a monthly Technology Meetup. All member booksellers are invited to participate in these online discussions; subscribe to the mailing list here to receive invitations for the Technology Meetups, Marketing Meetups, or both.