The True Cost of Amazon Revealed in New Study

On January 25, at Winter Institute 11, Civic Economics and the American Booksellers Association released a groundbreaking new study, “Amazon and Empty Storefronts,” which details the overall negative impact that Amazon has had on Main Street retailers and jobs, and the communities in which they are located, across the country. 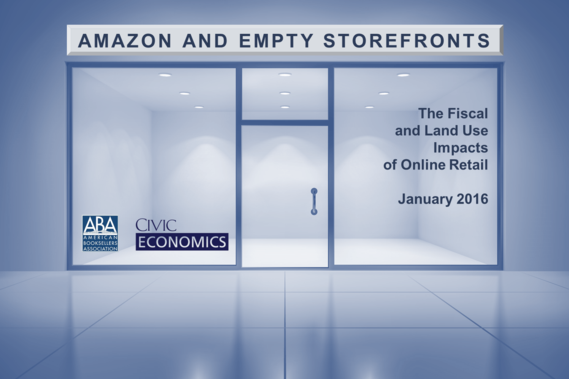 While Amazon generally receives substantial subsidies and tax breaks from states and municipalities for opening warehouses staked on the premise that these warehouses will create thousands of jobs, the national results are quite the opposite. Even counting all the jobs in Amazon distribution centers, Amazon sales produced a net national loss of 135,973 retail jobs, and the study showed that a total of more than $1 billion in revenue is lost to state and local governments.

“This unprecedented study makes abundantly clear the deleterious effects on the American economy resulting from Amazon’s strategy of retail dominance,” said ABA CEO Oren Teicher. “It’s our hope that the facts included in this report will help policymakers and the public better understand the need for more diversity in the marketplace and help them recognize the potential long-term costs of the loss of healthy local economies.” (For the complete study, executive summary, or individualized state summaries, click here.)

For the study, Civic Economics focused on two broad classes of impact: Fiscal (relating to public revenue) and Land Use (relating to development patterns at the local level). The report looks at calendar year 2014, the last year for which reliable data is available. Online sales have, the authors note, only grown since then.

To determine impacts, Civic Economics quantified Amazon sales at the state level to uncover how much sales tax went unpaid at the state and local level and how the shift from Main Street stores impacts property tax revenue. Nearly half of all states still collect no sales tax revenue from Amazon sales, and others collect only partial sales taxes, producing a nationwide sales tax gap of $625 million.

Overall, in 2014, Amazon sold $44.1 billion worth of retail goods nationwide, all while avoiding $625 million in state and local sales taxes, the study reports. These sales are the equivalent of more than 30,000 retail storefronts or 107 million square feet of commercial space, which might have paid $420 million in property taxes and employed 136,000 workers.

Importantly, this is just the tip of the iceberg. The study’s authors stress: “As Internet sales have risen unabated in recent years, little attention has been paid to the effects of that growth on American communities…. We focus exclusively on Amazon, which likely accounts for only one-third or less of total online retail. Given those limitations, these findings should be seen as a sign of far bigger impacts to come.”